Four weeks ago today I married an amazing man in the back garden. And now—as I sit here writing this—it’s great to publicly admit that we met online and immediately knew we would marry.
Just 6 months after we met, we were married. There, I said it.
This happened because maturity and experience are great things. Middle-aged love is nothing to scoff at either—especially when it brings such joy and happiness.
And in my case, I can’t say enough about the lessons learned from my divorce. I know now that it took a divorce in order for me to truly understand how much marriage and commitment mean to me. Marriage means working together and being a team and I have that now for the first time. It’s what I’ve always wanted and hoped for and it’s such a great feeling knowing now that someone truly has my back and I can count on him to be there. I’m pretty sure he feels the same way too.

Getting ready for our noontime wedding was a lot of fun. Up until the last minute we’d planned to get married that day in a government office but then I realized we could just do it at home. Why not?

Of course I tried to clean up the back garden as much as possible. I added a few pretty things to make it look better too, but overall, we didn’t really intend for it to be a big affair so not much was added. I did make this topiary though.

The night before the ceremony I packed for Alaska and straightened the house.

Since John didn’t move in with me until after our honeymoon, that night, we both had a lot of time to think about our new life together and what it would be like in the future.

My mind was so busy thinking about packing I knew I just had to be me no matter what.

That’s when I rushed out and bought some flowers to arrange at 9pm. That’s just the kind of thing that I do.

The morning of the wedding I had my hair and makeup done. It felt amazing and I’m so happy I did so.

When you plan a noontime wedding, that doesn’t mean you have a ton of time to get ready. I know that now. But of course, I pulled it all together.

John and I only invited a handful of important people. We hadn’t really thought a lot about wedding photography so many of these pictures were just shot by iPhone by my nieces.

My flowers were designed by a dear friend who has an amazing touch. (Quinn in the City Flowers).

I had asked Quinn to go “over the top” and I’m pretty sure she nailed it.

On my wedding day, I was very happy and we had a little secret too.
My eldest niece, seen here on the left, was the minister of our ceremony. We kept that a secret from my family until after the ceremony. It was such a great idea and it made the event so much more meaningful.
That’s not to say that her younger sister (on the right) wasn’t involved too. She made sure we had lots of photos and provided plenty of laughs.
I love my girls.

Afterwards, our little group met both of our mothers for a special dessert at one of my favorite restaurants in Portland.

Yes, we didn’t invite our moms to our wedding. They’ve been through it all before so we did things differently and they didn’t mind at all.

Trust me, it worked very well and they both loved seeing us all dressed up while we ate Boccone Dolce.

And with that, we were off to Alaska!

Yesterday we held a private wedding ceremony at home. We invited a few family members and friends but more to come on that later. For now, I just wanted to share some of my wedding flowers with you.
Currently I’m in Alaska on our honeymoon. Blogging from my iPhone sure is awkward. Will fire up the laptop for a longer post soon. 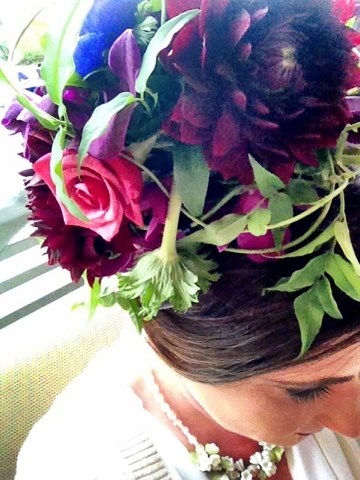