It is difficult for me to believe that I have been to the Bay Area almost twenty times in my life, and yet, this was my first visit to the city’s oldest structure, a location made even more famous by its inclusion in one of my all-time favorite Alfred Hitchcock films, Vertigo.

I loved that the official plaque made it very clear that the original adobe walls and roof tiles were still intact.

Inside, the proof is made even more crystal clear.
Without going into too much detail about the alter and its iconography, I can say that much is being said in this one that is rather atypical. Since I am such a plant and animal nut, it was really great to see such a formal alter for St Francis and all that he stood for in his work.

Beside the mission church is the larger, more modern, Basilica. Seeing its main alter decked out with garlands of blooms and tons of flowers flooded me with memories. It also allowed me to show my husband where my penchant for springtime pagan-like bloom worship sprung from.

Lastly, there is the famous cemetery. If you have not yet seen Vertigo, I promise to hide my shock. If you have, this is where Jimmy Stewart’s character Scottie follows Madeline and he watches her as she sits and visits a gravesite.

The gravestone from the film is no longer here, but there are plenty of real people to keep you more than entertained for an hour of so. Oh, and then there are the plants! 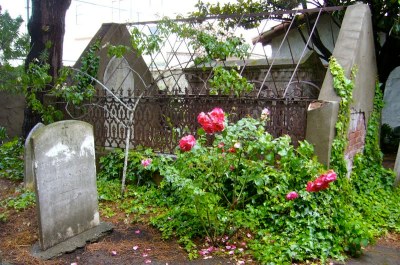 The plants are rambling all over the place.

The architecture, the light, and the plants, made for an unimaginable visit that day. 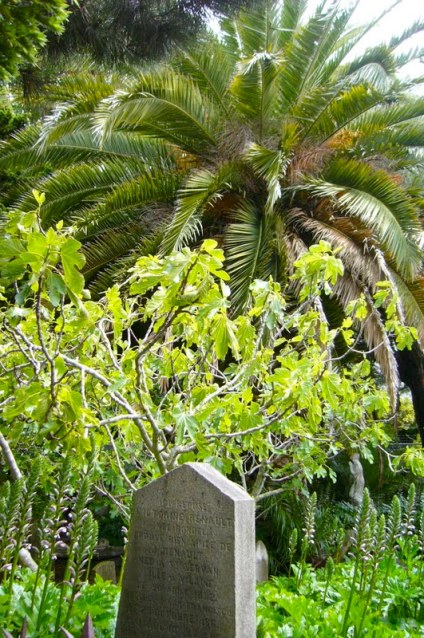 Even though it was overcast, I could easily see why Hitchcock had picked the site. For many years the church actually left the gravestone of one Carlotta Valdes in the cemetery, but it became too much of a tourist site, and the stone was removed. I am not sure where it is now, but I am sure that it is out there somewhere.

In the film, this figure can be seen behind Scottie. It was once part of a grotto, and from online research, it appears to have been moved around a bit.

St Francis pacing in thoughtful prayer around the rose garden. He was a bit too large and lifelike for me.

I really liked this stone seat. Its permanence is unquestionable.

A newer addition, this looks a lot like the spineless Prickly Pear developed by Luther Burbank. Against the white wall, it really stands out. 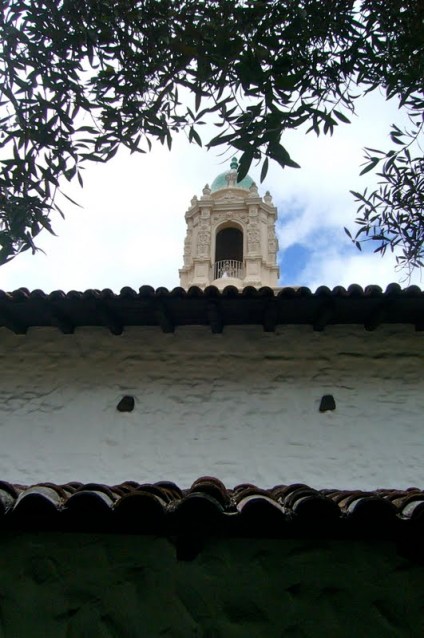 As always, the history of the site appears to overlap with that of my husband’s ancestor who travelled on what was John C. Frémont’s famous Third expedition. It is sad that Basil LaJeunesse became an historical footnote during that trip, but his death reverberated for many years in the lives of those closest to him. It is my belief, based on what I’ve been reading, that it was a loss both Kit Carson and Frémont were unsettled about since during the ensuing weeks they did things they later regretted.

One of the most controversial actions these men took involves this man.

This is the grave of the first mayor of San Francisco—though he was called an Alcalde and the city was then still Yerba Buena. Kit Carson shot and killed his twin sons and their distant cousin in 1846 near San Rafael when told to do so by John C. Frémont. This was just a few weeks after Basil’s death, after they’d attacked and killed the wrong Native Americans to avenge the death in Oregon, and after they must have realized they’d been tracked by Modoc paid by the Mexican Government who’d been tracking them from their encampment near Monterey as they’d headed north of the border for safety.

So enough about all of that for now, you soon will be seeing more of Frémont as he has so many native plants that have his name attached to them. I just have to add this stuff because it is so much a part of why both my husband and I love where we live, between both the Pacific Northwest and California.

So the next time you find yourself in San Francisco, I invite you to sit and stay awhile. Meditate a bit and transport yourself back in time to a California before the Gold Rush, to a time when it was part of Mexico.