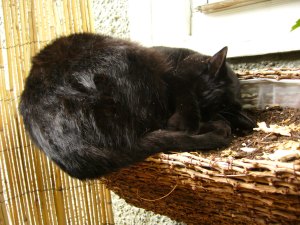 Most gardeners are lovers of animals, and for some reason, the two almost always seem to go together. I have heard that in Great Britain, it is most frequently the moggie cat that is much beloved, but here in the US, it seems that we may have just as many dogs digging in the dirt with their owners. Here at our home, we have three black cats, but in addition to Macavity, Maurice and Mona, we also have another black cat neighbor named Meng. There are tons of other cats that come and go too, but our hearts, and garden, belong to the first four, and for the most part, these four seem to tolerate one another.
Like other soil toilers, I also adore birds. This can be a bit difficult though if you also care for cats. Every year we try to make their collars louder, but I still worry about my feathered guests. In general, I have tried to design a garden which encourages bird-watching, and not bird killing. During the last four years, only one bird has been killed–as far as I know… This may have something to do with my pets’ penchant for napping on the job. (See Above: Mona on an average day.)